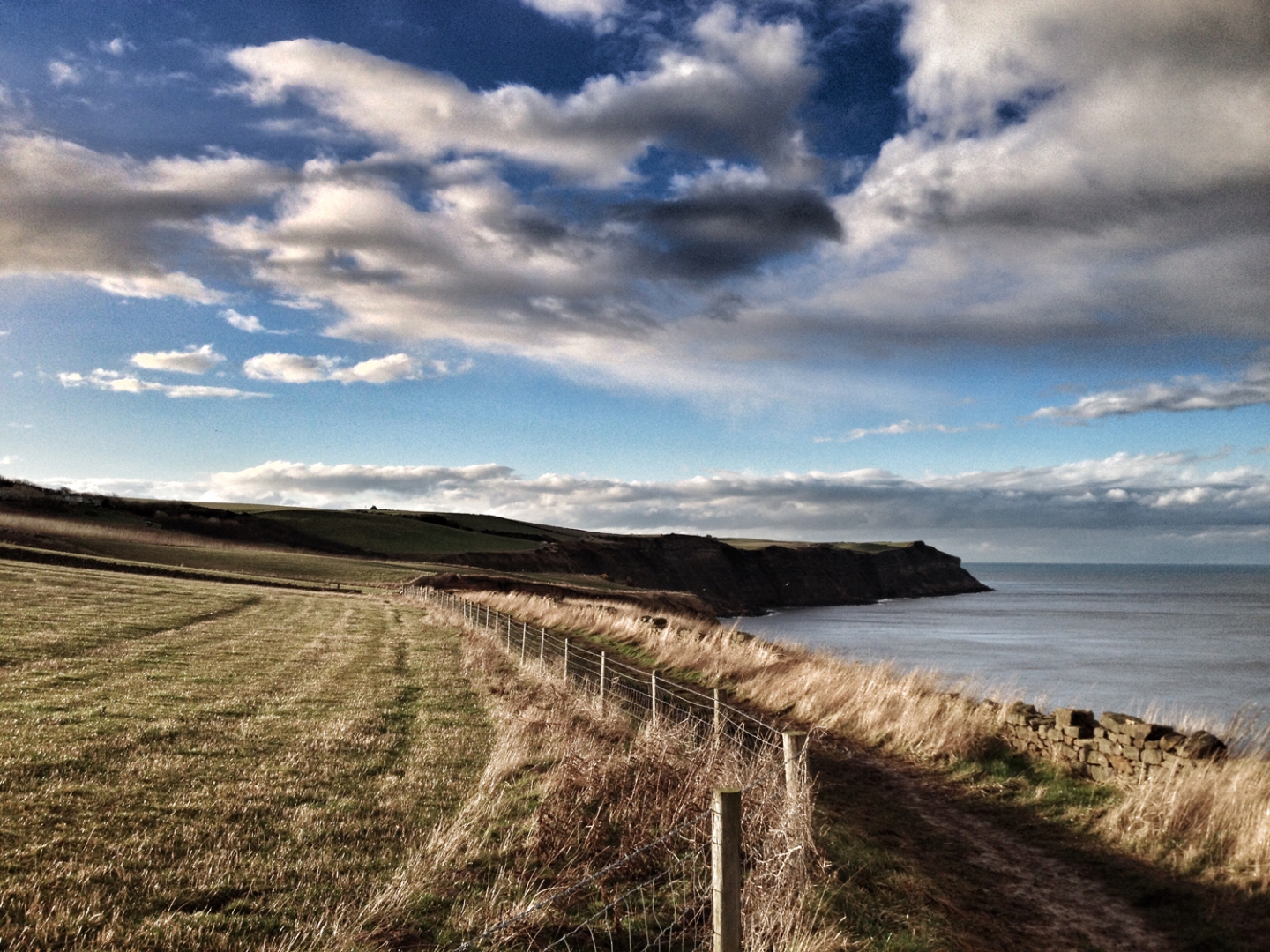 We arrived in Whitby just after midday. It was such a cheerful sight when we left the train station. The riverfront was showered in the sunshine. Windows glittered under the blue sky. Independent and nostalgia shops lined the old streets, all of different colours and shapes, but all inviting. A lovely lady asked us if we’d like a photo together. How sweet!

It was a shame we didn’t have a lot of time to spend in Whitby – we had to get to Robin Hood’s Bay before it got dark (daylight at the end of February was still short). So we headed towards Whitby Abbey seated on the top of the hill after we had fish and chips for lunch (of course!) along the famous 199 steps – I didn’t count, too busy taking photos!

We were fascinated by St. Mary’s Church. Just mention one of the exciting things about it: pews were all in closed boxes. One of them was covered by a big piece of fabric and the little sign explained: “In times past, it was the duty of our Church Maid to cover every privately owned or rented pew after the Service each Sunday. This was to prevent the chimney smuts from the cottages below the Church settling in the pews and spoiling the occupants’ best Sunday Clothes.” Best Sunday Clothes! Just like what I read in the historical novels!

I had to drag my wistful husband out of the Church (“look the roof’s wonky!” “It’s a real wood-burner!”), back to the amazing silhouette of Whitby Abbey. From there, we started our walk on the Cleveland Way. The signpost had an acorn on it and said: Cleveland Way Robin Hood’s Bay, 6 1/2 miles.

This lovely route map is from National Trails website.

We skipped all of the heather moorland section (keeping it for summer) and only went along the coast bit. I’m sure it’s not always like this, but if you ask me to use one word to summarise our experience on Cleveland Way, it’s this – MUDDY! One souvenir I took home with me was a broken jacket. A few sections of the path were so slippery we had to hold on to the wire fence. And my jacket caught on the barbed wire and got a hole from it.

(We also wondered if the farmers there had ever decreasing farmland because the sea erosion seemed really serious!)

It’s probably our own fault – having picked this time of year to go. We should be thankful really, the storm was so bad just a week ago, a train near York on the East Coast Mainline was stopped without heating or electricity for 5 hours at night. We had lovely weather, just a bit muddy, really shouldn’t complain. Because apart from that, it was a perfect coastal walk. We saw so many amazing rainbows – the number of rainbows I saw in my whole life beforehand was less than what we saw on that beautiful afternoon. And it was the first time I saw a full rainbow. It was so perfect that you can’t help praising the Creator for his wonderful creation. 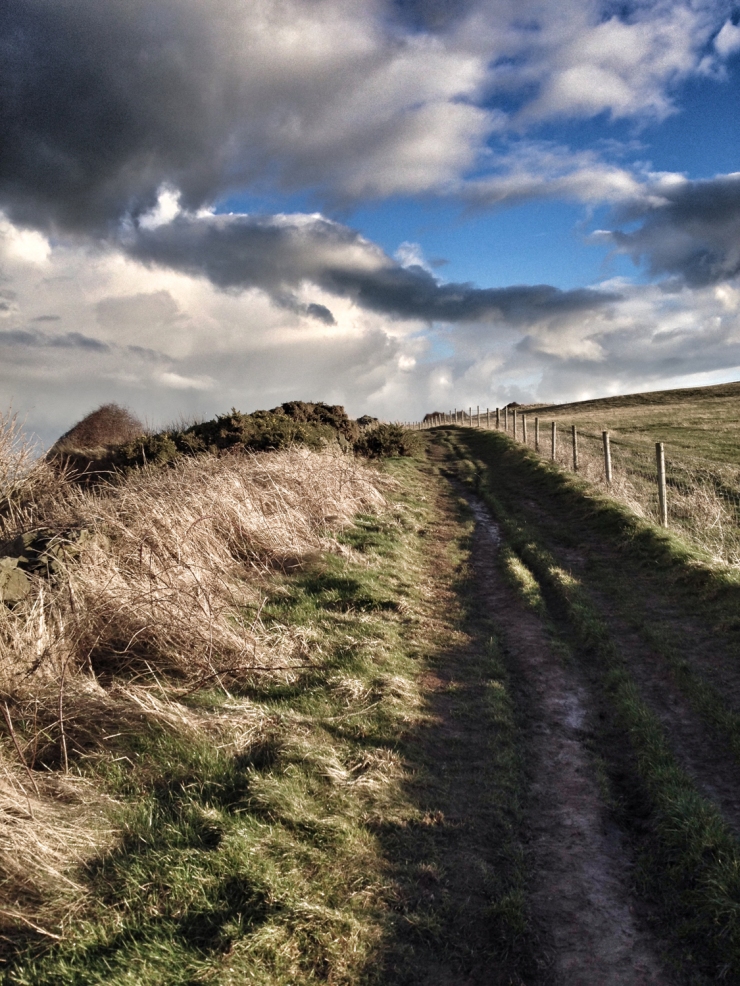 There were not many landmarks or anything to locate where we were on the map. It was impossible to get lost, but it was hard to tell how far we still had to go. At one point, there were two people sitting on the grass, drinking beer and looking like they’ve given up.

It started to get dark before we could see Robin Hood’s Bay which was a bit worrying. But the sea and the sky showed us an entirely different kind of beauty. And then, we had our first glimpse of Robin Hood’s Bay’s, tucked cosily in the gentle curve of the coast line. Warm light was glowing in the windows. We walked under the dusky sky hand in hand (more precisely, I was dragged along). I was sure there was an old Chinese poem speaking just about the romance like this. 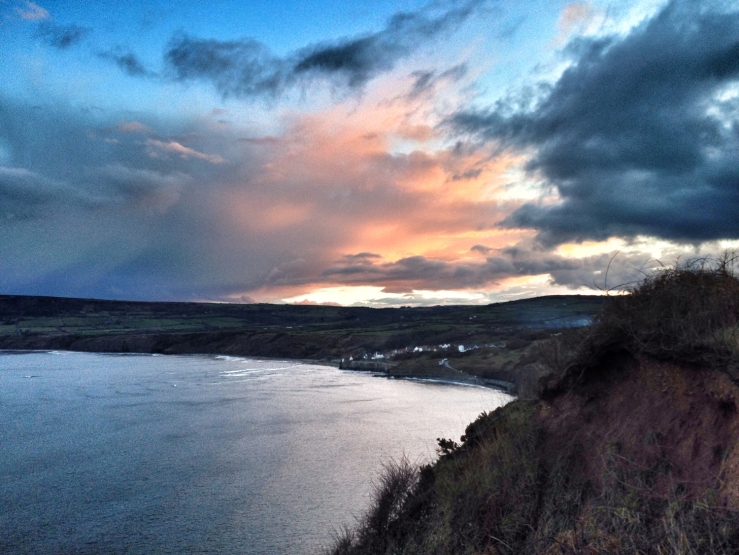 We got to the Youth Hostel in pitch darkness. But fortunately the path from Robin Hood’s Bay to Boggle Hole was pretty well maintained. I dreamt about rainbow coloured muddy road that night. Maybe I didn’t – I can’t remember!