Today’s walk was our favourite among all three walks. Ingleborough is the second highest mountain in Yorkshire. The route that Country Walking suggested included a variety of sceneries. Very interesting and it kept me going!

Same WARNING as the last post. This blog post contains a lot of beautiful pictures of Ingleborough and areas around, ESPECIALLY TROW GILL! If you don’t want your future walking experience in this area to be spoiled, READ ON but scroll through the pictures quickly!!

We took a bus from Settle. The bus stop was right outside The Naked Man Cafe which was bustling with life (so was the market) and looked so tempting! But our tight schedule meant we didn’t have a chance to have a cup of tea there (or the award winning ice cream!) at all. That was a shame. The other one was the Giggleswick School Chapel. A colleague of mine happened to go to school there many years ago. She told me about it and we saw it a couple of times from the trains. But didn’t have time to go and visit! It really looks quiet amazing from their website (they also have a great Visitor Guide (a PDF) with a lot of information).

We arrived in Ingleton at about 10.15am and found it a lovely village. Before the trip, I was very excited about all the viaducts. That was definitely THE word I learnt from this trip, along with pot holes. And this was the first viaduct we came across.

Again we decided to put Ingleborough Summit at the beginning of the walk, and go towards Horton Station. There were a lot of information about local public transport in the area, very accessible and helpful – crucial to our planning. We were basically doing a triangle between Settle, Ingleton and Horton on Day Two. The last bus between Ingleton and Settle was around 5pm; the train between Horton and Settle ran until about 9pm. So to come back to Settle on the train was obviously a safer idea.

So our walk started from here. Greeted by a lone tree.

Looking back toward Ingleton.

This was Ingleborough in the distance. It always looked so far away. It’s amazing to me how far a person can move on foot in one day.

The edge of White Scars. 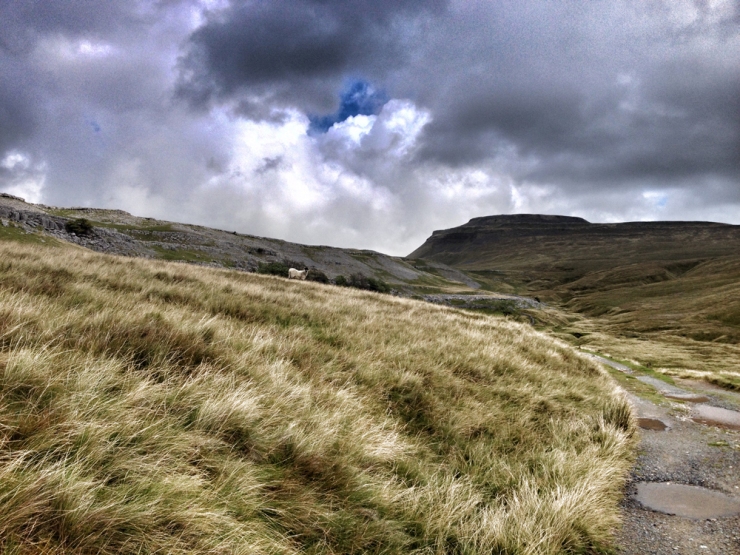 How about a Grand Designs house with a windmill? We imagined it had thick glass windows and wood burners in winter, eating lamb and drinking goat’s milk (do sheep produce milk too?).

Ingleborough got closer. Having walked mostly in the Lake District, Ingleborough looked more like a plateau rather than a mountain to me. The Summit looked so much like a jam jar lid. Don’t you think? 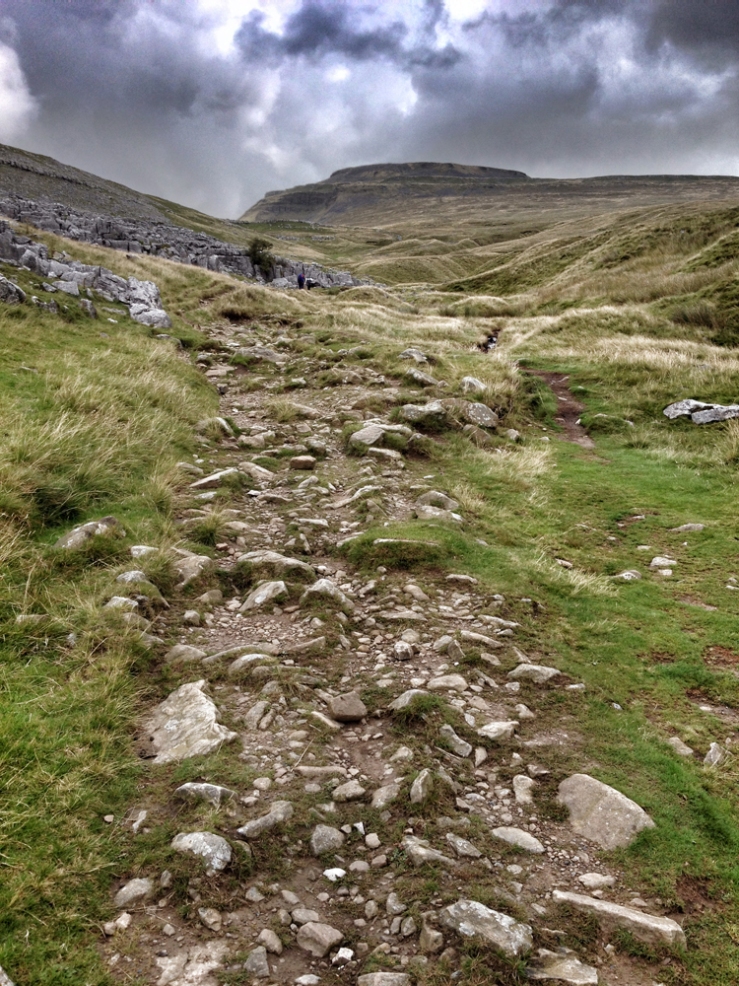 Looking back towards Ingleton. A big rain cloud was coming towards us! The weather forecast was really awful before we went. We were packing books and magazines in our bags, just in case we had to spend most of the time in coffee shops reading (then we’d have experienced The Naked Man Cafe fully). I was even considering taking my half crocheted scarf with me (I didn’t). But the weather actually was not bad at all. It changed a lot, from “this is nice, isn’t it”, to “I’m boiling’, to “ah rain”, to “shall we stop a bit for the wind”, to “I’m taking off!!” etc etc. But generally speaking, it was lovely.

Just before the final ascent, there was a sign saying the first Three Peaks circuit was done in 1887 and at the moment, the best record was just under 3 hours! We couldn’t believe it and still can’t see how it can be done (even with the paved path!).

The last bit of ascent was pretty steep and the path was almost lost among the rocks. But suddenly, we stepped onto the top. The summit was an archaeological site according to the sign we saw earlier. It was pretty amazing to look at the stones and rocks on the ground and imagine which was part of the tower and which was from the hillfort for military purpose or ring cairns for ritual purpose thousands of years ago.

The top was as windy as the previous day. We hid behind the cross-shaped shelter and had our tasty tuna salad. 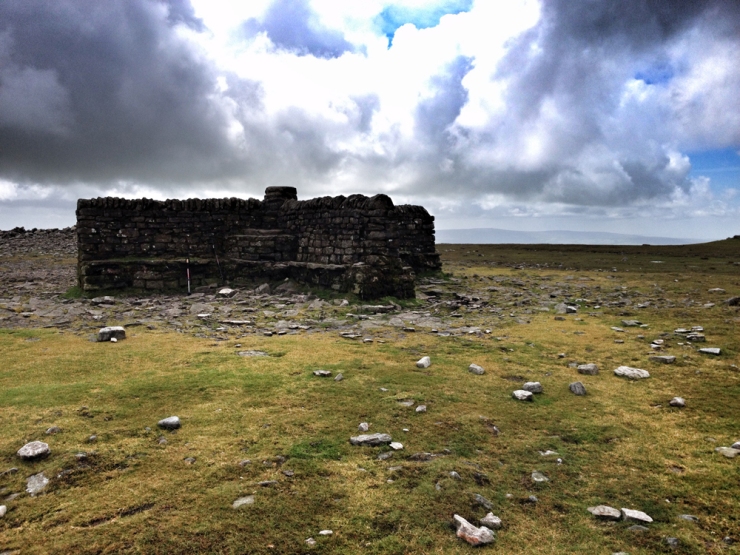 Going down towards Little Ingleborough. 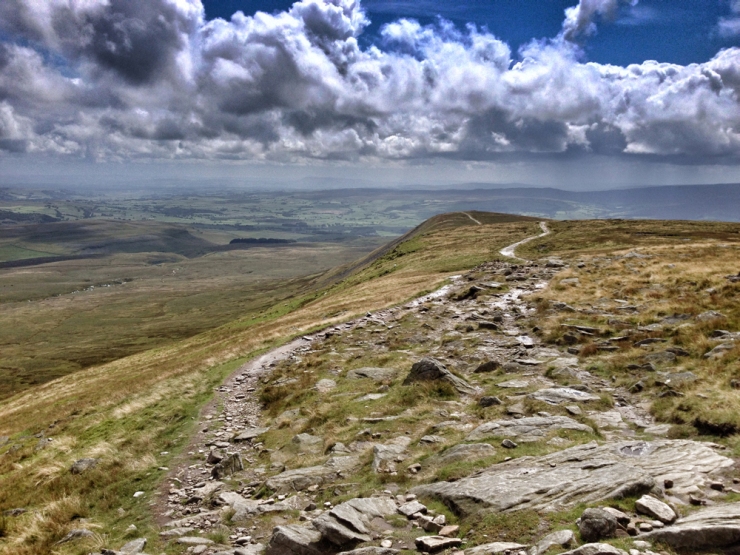 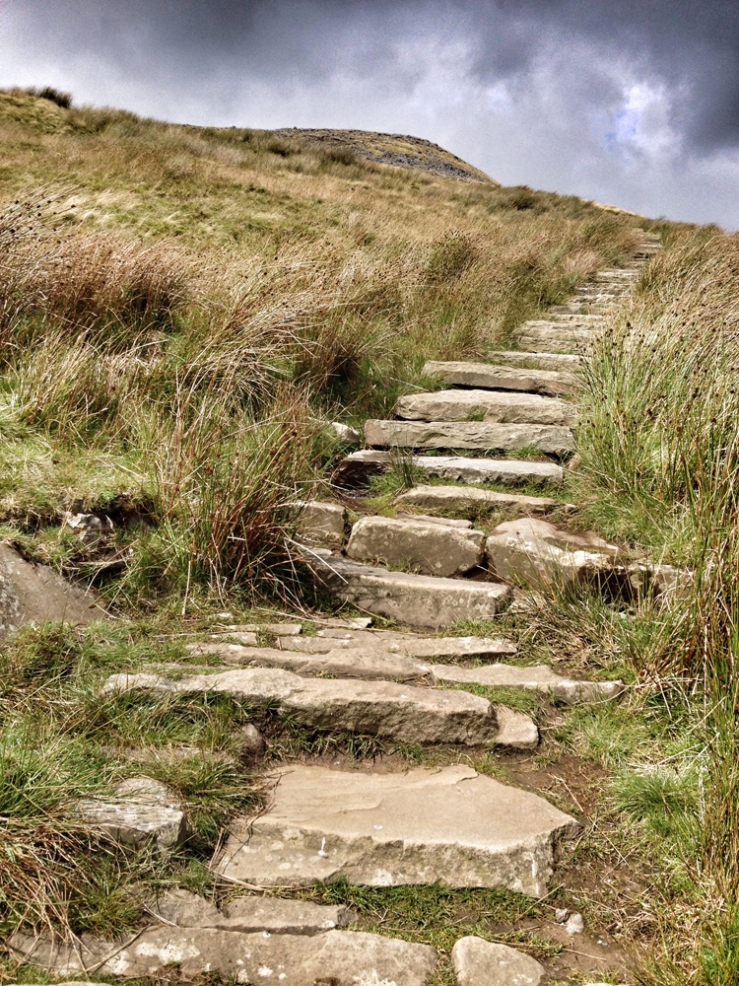 We met the same guy as we did yesterday on top of Pen-y-ghent when we were going towards Gaping Gill. Here was the famous Gaping Gill! There were a lot of big and little tents in the tiny valley along Fell Beck. We went down and had a look. Craven Pothole Club was getting ready for opening to the public for the Saturday following. How exciting to be able to get down and have a look! Apparently, according to a staff onsite, it was big enough down there to host York Minster! At the time, we didn’t know if these pot holes, shake holes were formed over years or just sunk suddenly (like earthquake), so I didn’t feel very safe a lot of the time… but according to the internet, they were all ancient… 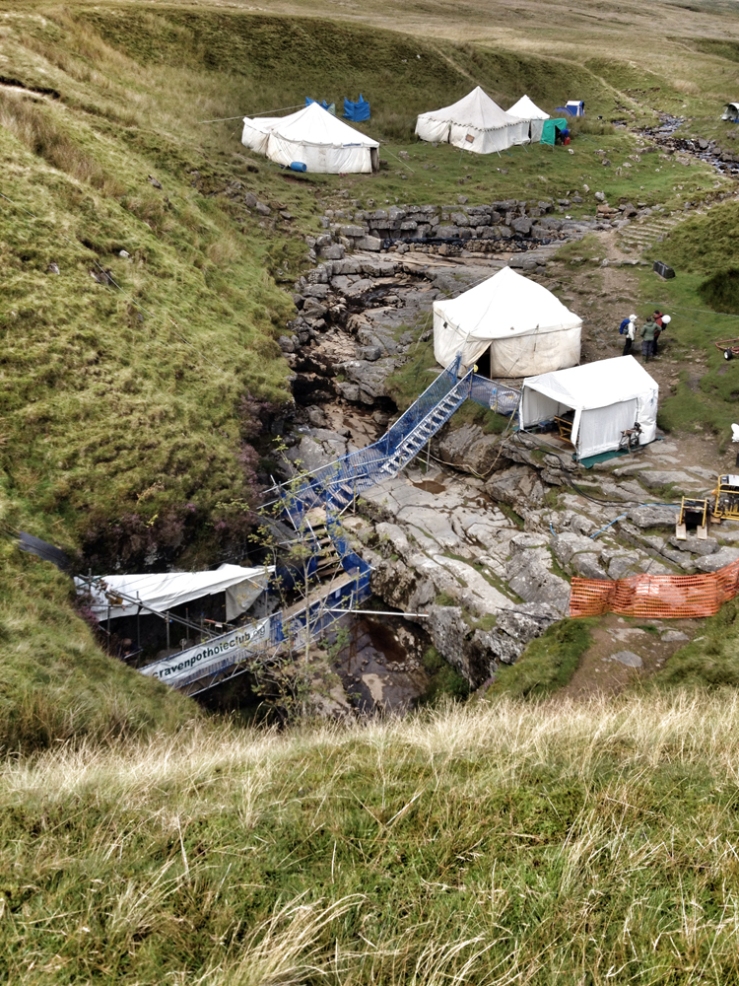 And then, the highlight of the day: Trow Gill! 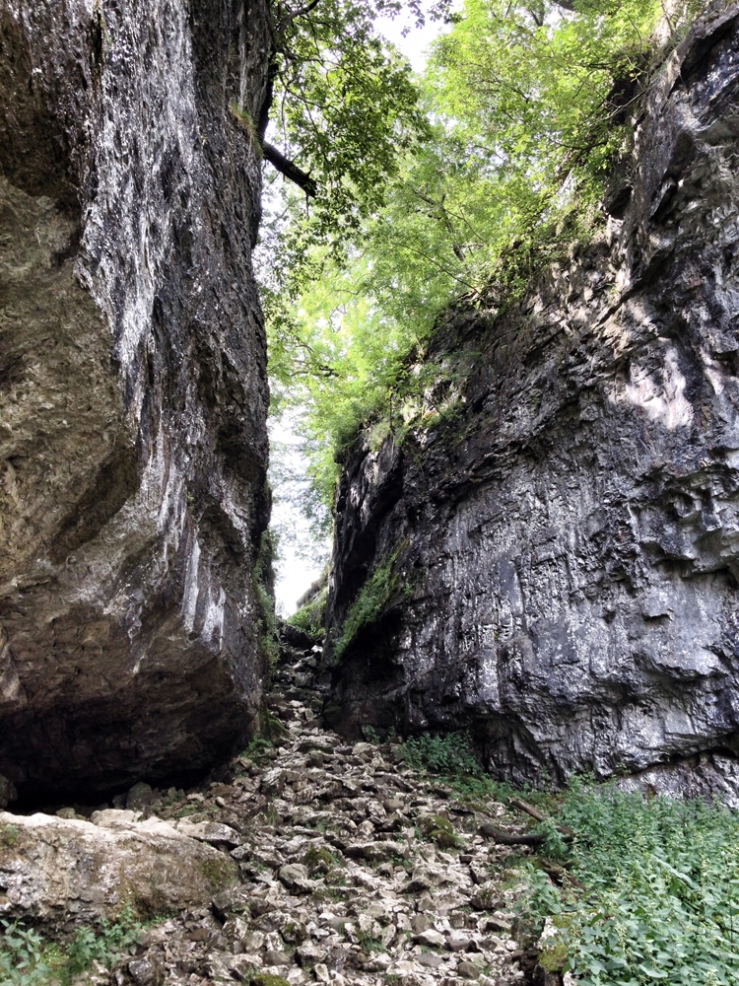 It was not right for OS map just draw a blue star and write “Trow Gill”. It should be an exclamation mark and “Amazing Gorge”.

After this, just to calm me down, there was mile upon mile of grass field and a lot of black cows with yellow earrings. Until we saw the lovely station of Horton again.

Limestone pavement. Is that Whernside in the distance? 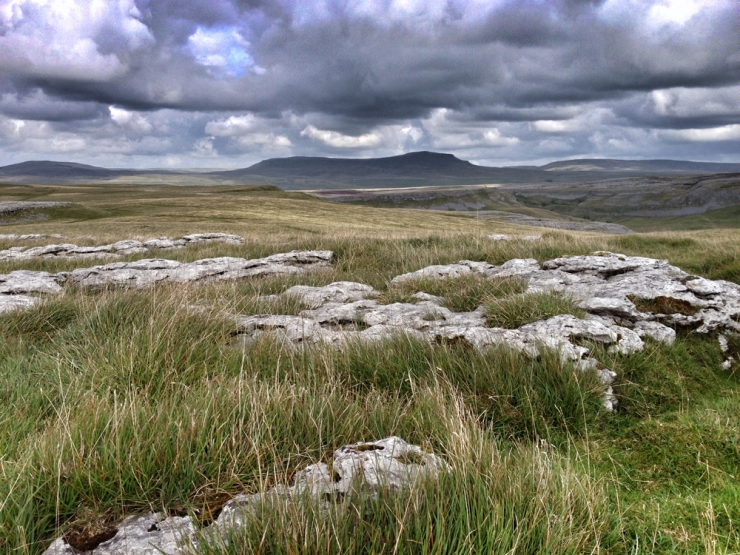 It was really lovely to see Horton Station when I was a bit worried about missing the train and having to wait for two hours for the next one. Two little children who were also waiting for the train told us how far they walked that day very proudly. Then we caught a train from Horton back to Settle at about 6pm.

3 thoughts on “The slow walk on Yorkshire Three Peaks – Ingleborough”