The weekend feels ten times longer because we travelled ten times the distance.

We booked this walking trip before Christmas because we wanted to go to the Lake District as soon as possible in the New Year. (People are celebrating Chinese New Year in my home country this week by the way. And if you are 12, 24, 36, 48, 60, 72, 84, 96 or 108 years old, this is your special year, the Year of the Dog.) January was too cold and daylight was too short. February is better, but not by much I realised, a bit too late. Last Wednesday there was a freezing gale in Newcastle. I struggled against the wind, wrapping myself up all the way to the nose and clutching a Greggs baguette, thinking, why did I book a trip to the Lakes at this time of the year? And that certainly was not the only time I thought “why do I do this to myself??” during this trip.

The plan for Saturday was to do a loop that started and ended in Grasmere village ticking two Wainwrights: Gibson Knotts and Helm Crag, aka, “Lion and the Lamb”. Here is the route: 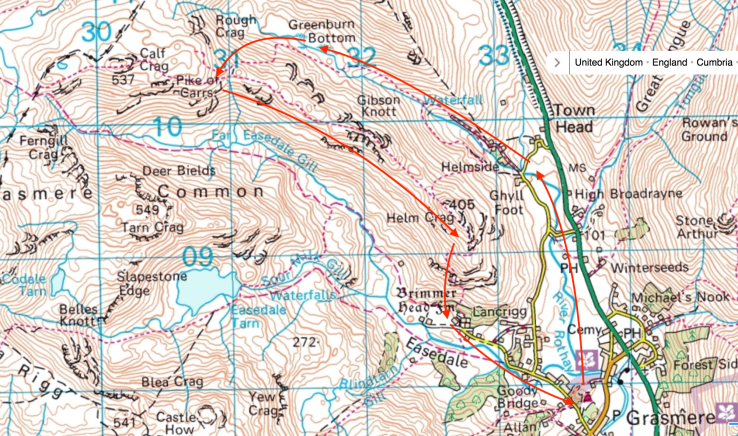 Welcoming sheep at the gate of Ghyll Foot

From Ghyll Foot onward, the valley was enveloped in a thick fog the whole time. When we got to Greenburn Bottom, the terrain was suddenly flat and turned into a snow land. The situation came to an impossible mess. The fog cut short our vision – I thought the ridge would be pretty obvious to aim for but all we could see was a wall of white fog. Countless evil ponds were quietly hidden under the snow blanket – only one of us landed in one of them, a miracle I’d say. The ground was a mixture of soaking wet grass and sinking mud – jumping across them made me feel like a sort of Super Mario character. The path was under the snow too. All we had were footprints: human footprints and sheep hoof prints. We soon ended up in front of a feeding trough and three suspicious dirty animals. Human footprints thinned out in a confused manner. I realised later on that the path disappeared for sections because it was under the rushing stream we tried to avoid. On top of all these navigation difficulties was the trouble of walking in calf-deep snow, rain and hailstone showers. It was boiling hot forcing our way forward, but freezing cold as soon as we stopped to catch our breath.

And there came the worst sight, a dead sheep stuck between three stepping stones where we had to cross the river.

It was silent, every breath in the white fog, deep and slow steps in the white snow, the constant drizzle in my eyes. The silence was incredibly loud, the rushing river, the plunging waterfalls, the hailstones hitting my soaking wet waterproofs. There was no one except us for two hours. And our conversation had minimised to the mere repeat of “ouch”, “are you OK?”, “not really”.

I was on the verge of tears and swear words when I heard voices suddenly. Walkers who had started from the opposite direction around the loop started to pop out of the mist at the halfway point. And I noticed the ground changing quickly. Solid red rock hit my boots nicely. A bit of rock climbing here and there. I knew we were approaching the summit soon.

One strong gust and a hole split open in the fog. Mountains unveiling their snow-covered slopes one by one. It was glorious and magical. We suddenly realised the drops around the rocks we were standing on. Within minutes, the magnificent view of the valley and Grasmere unfolded like a scroll. The sky was a jewel-like blue. A pair of big birds effortlessly glided over our heads. The sun shone in our eyes. The spirit came back to us. We grinned at each other. Fingers frozen gripping the camera. 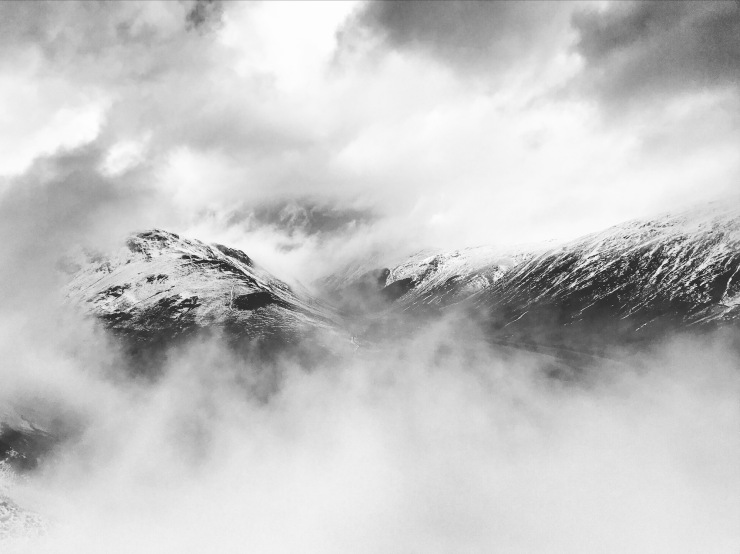 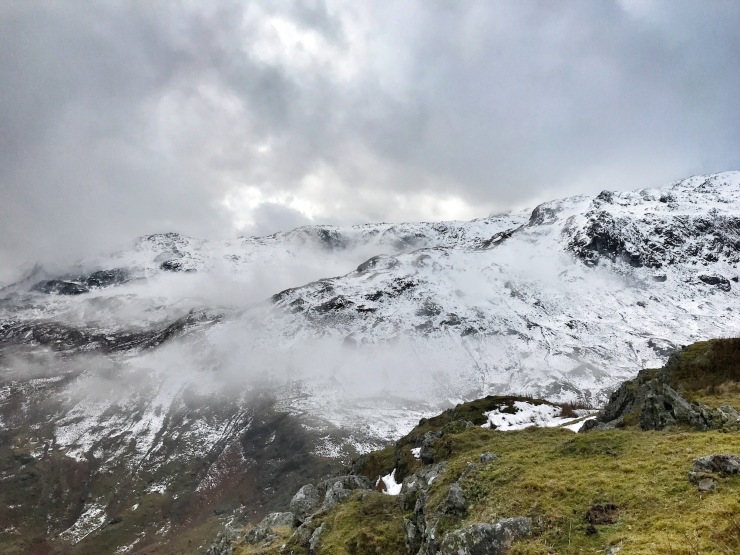 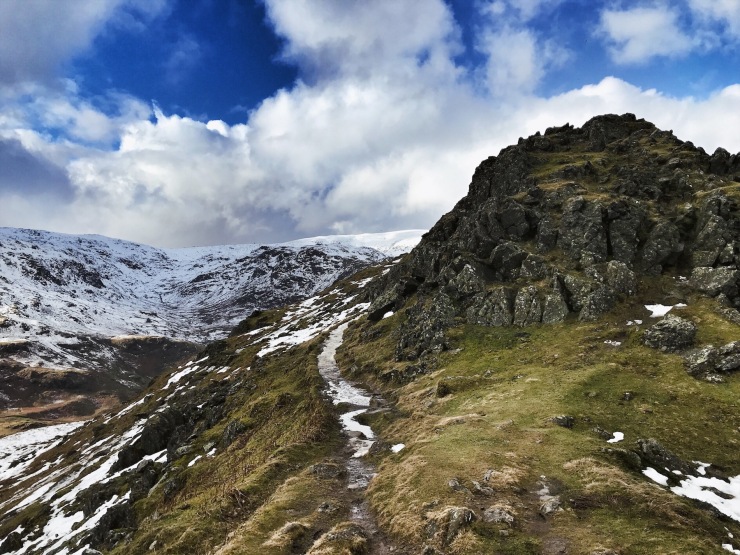 We had our lunch under the “Old Woman Playing the Organ” rocks (the true summit that Wainwright failed to touch) and continued to see the official “Lion and the Lamb”. I couldn’t really see the lion or the lamb, probably because we were coming from the wrong direction. But people almost queued up to climb that rock, so I guessed it must be it – we didn’t climb it, I was in a frantic search for a loo break venue at that point – there were so many walkers on the ridge!

Could that be the “lion” on the top?

I got a big hole in my right foot as a souvenir from the walk. No pain no gain.

See you again in summer.